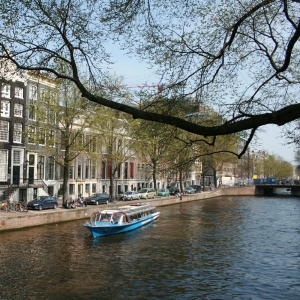 Amsterdam takes its name from a Dam of the River Amstel originating as a small fishing village in the 12th century. It became one of the most important ports in the world as a result of its innovative developments in trade and became a leading centre for finance and diamonds.

As a major European centre of learning and commerce since the 17th Century, today Amsterdam’s rich cultural heritage reveals itself in some of the finest art galleries & museums in the world.

Its relative proximity to the UK makes it an ideal destination for school groups travelling by coach, rail or air.
For a capital city, Amsterdam is very compact and can be easily explored on foot but to soak up the true atmosphere, take a ride on one of the many Canal Boats that navigate their way through the beautiful back waters of this unique city .

All the major museums in the wonderful city are situated on the Museumplein created in the last quarter of the 19th Century on the grounds of the former World's Fair.

To tailor your perfect Amsterdam school trip just get in touch.

Explore Amsterdam's rich cultural heritage and experience some of the finest art galleries and museums in the world.