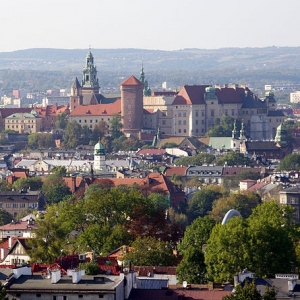 Most historians trace the establishment of a Polish state to 966 when Mieszko I, ruler of an area equivalent to modern day Poland accepted baptism and adopted Catholicism as the new official rel;igion of his subjects. Catholicism still remains the major religion in the country and in the 20th century Karol Wojtyka, Archbishop of Krakow became Pope John Paul II, the first non-Italian pope since 1523.

Poland is a pioneer of European constitutionalism. In 1791 the King and Parliament of the Republic of Poland and Lithuania passed the first constitution in the Old world later called the 3rd of May constitution.

In the 20th Century the country was a pioneer in the fall of communism and led the change of ‘Old Eastern Bloc ‘ countries into ‘ Free Democratic States ‘.

Wawel was the seat of the Polish Kings in Krakow until 1596 and we visit this wonderfully preserved old city to see the Castle, Old Town and Kazimierz, the old Jewish Quarter. This area became a ghetto during WW2 from where the inhabitants were sent to concentration camps like Plazlow and the Extermination Camp at Auschwitz, which we will respectfully visit.

To tailor your perfect Poland school trip just get in touch.