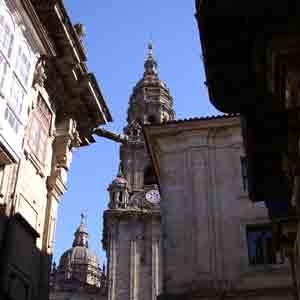 Santiago Compostela The cathedral borders the main plaza of the old and well-preserved city. Legend has it that the remains of the apostle James were brought to Galicia for burial. In 813, according to medieval legend, the light of a bright star guided a shepherd who was watching his flock at night to the burial site in Santiago de Compostela.

Our tour takes us along the Camino Ingles ( where pilgrims arriving from England landed to start their walk to Santiago)stopping en route to see areas where pilgrims would rest and giving pupils a more in depth look at the Camino.

La Coruna was originally said to be settled by the Gaelic Tribes from ireland and some say they built a tower near the roman Tower of Hercules where they coukd see Ireland across the gaelic Sea. it is now a bustling port and second largeat city in Galicia.